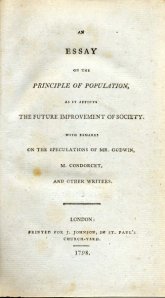 Title page of An Essay on the Principle of Population

Sometime on these dates, the English demographer and political economist Thomas Robert Malthus was born at Dorking, a place just south of London.

Malthus entered Jesus College, Cambridge, in 1784 and was ordained a minister of the Church of England in 1788. He earned his M.A. in 1791. He is best known for his An Essay on the Principle of Population, which was first published in 1798 and was read by Charles Darwin forty years later. This important essay first identified the geometric role of natural population increase in outrunning subsistence food supplies, prompting Darwin to explore the actual patterns of evolution.