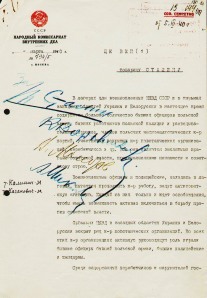 The accepted proposal of Lavrentin Beria to murder all Polish officers who were war prisoners in the Soviet Union.

On this date, pursuant to a note to Joseph Stalin from Lavrentiy Beria proposing to execute all members of the Polish Officer Corps, the members of the Soviet Politburo — Stalin, Vyacheslav Molotov, Kliment Voroshilov, Anastas Mikoyan, Mikhail Kalinin, and Lazar Kaganovich — signed an order to execute 25,700 Polish “nationalists and counterrevolutionaries” kept at camps and prisons in occupied western Ukraine and Belarus. About 8,000 were officers taken prisoner during the 1939 Soviet invasion of Poland, the rest being Poles arrested for allegedly being “intelligence agents, gendarmes, saboteurs, landowners, factory owners, lawyers, priests, and officials.” The reason for the Katyn Forest massacre, according to historian Gerhard Weinberg, is that Stalin wanted to deprive a potential future Polish military of a large portion of its military talent:

It has been suggested that the motive for this terrible step [the Katyn massacre] was to reassure the Germans as to the reality of Soviet anti-Polish policy. This explanation is completely unconvincing in view of the care with which the Soviet regime kept the massacre secret from the very German government it was supposed to impress… A more likely explanation is that… [the massacre] should be seen as looking forward to a future in which there might again be a Poland on the Soviet Union’s western border. Since he intended to keep the eastern portion of the country in any case, Stalin could be certain that any revived Poland would be unfriendly. Under those circumstances, depriving it of a large proportion of its military and technical elite would make it weaker.

Since Poland’s conscription system required every unexempted university graduate to become a reserve officer, the internees included much of the Polish intelligentsia, and the Jewish, Ukrainian, Georgian and Belarusian intelligentsia of Polish citizenship. Thus, the Katyn massacre is one of the deadliest anti-intellectual atrocities in history.

On this date, the Copernican theory was declared “false and erroneous” by the Decree of the Holy Congregation of the Most Illustrious Lord Cardinals in charge of the Index (more commonly known as the Decree of the Index) written by Cardinal Robert Bellarmine, and issued by the Catholic Church in Rome. Further, no person was to be permitted to hold or teach the theory that the Earth revolves around the sun. When Galileo subsequently violated the decree, he was put on trial and held under house arrest for the final eight years of his life.