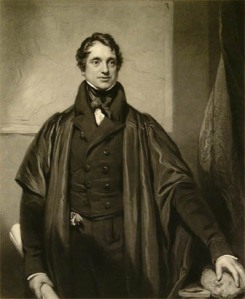 On this date, the English geologist and paleontologist Adam Sedgwick was born. He was one of the founders of modern geology. Sedgwick was the first scientist to apply the name Cambrian to the geologic period of time, now dated at 570 to 505 million years ago. Twentieth-century research has uncovered so many excellent fossils in Cambrian sediments, especially the Burgess Shale in Canada, that this geologic period is sometimes referred to as the “Cambrian Explosion.”

Sedgwick attended Trinity College at Cambridge University, where he took holy orders in 1817. In 1818, he became Woodwardian Professor of Geology at Cambridge, despite the fact that he had no formal training in geology. His lectures at Cambridge were immensely popular; he was a spellbinding lecturer, and – breaking with the traditions of his time – his lectures were open to women, whom Sedgwick thought could make great contributions to natural history. He kept giving his famous lectures until 1871.

After passing his examinations for the Bachelor of Arts degree in January 1831, Charles Darwin began attending Sedgwick’s geology lectures, which he found fascinating. During the summer of 1831, Darwin was Sedwick’s field assistant in north Wales, and Darwin got a “crash course” in field geology from Sedgwick. This was an experience that proved valuable to Darwin over the next five years, on his round-the-world voyage on H.M.S. Beagle. During this voyage, Darwin sent geological specimens and reports to Sedgwick, who wrote approvingly to Darwin’s family:

He is doing admirably in S. America & has already sent home a Collection above all praise. – It was the best thing in the world for him that he went out on the Voyage of Discovery. . .

However, after reading The Origin of Species, Sedgwick candidly wrote to Darwin on November 24, 1859:

If I did not think you a good tempered & truth loving man I should not tell you that. . . I have read your book with more pain than pleasure. Parts of it I admired greatly; parts I laughed at till my sides were almost sore; other parts I read with absolute sorrow; because I think them utterly false & grievously mischievous– You have deserted– after a start in that tram-road of all solid physical truth– the true method of induction. . .

Sedgwick was opposed to Charles Lyell’s models of slow, gradual geological change and a more or less steady-state Earth. Instead, he followed Cuvier’s idea of multiple “catastrophes” that had destroyed much of Earth’s life. But Sedgwick did not object to evolution, or “development” as such theories were called then, in the broad sense – to the fact that the life on Earth had changed over time. Nor was he a “young-Earth” creationist – he thought that the Earth must be extremely old. Nevertheless, Sedgwick believed in the Divine creation of life over long periods of time, by “a power I cannot imitate or comprehend — but in which I believe, by a legitimate conclusion of sound reason drawn from the laws of harmonies of nature.” His problem was with the amoral and materialistic nature of Darwin’s proposed mechanism of natural selection, which Sedgwick thought was degrading to humanity’s spiritual aspirations. His letter of November 24 went on to state:

This view of nature you have stated admirably; tho’ admitted by all naturalists & denied by no one of common sense. We all admit development as a fact of history; but how came it about? Here, in language, & still more in logic, we are point blank at issue– There is a moral or metaphysical part of nature as well as a physical. A man who denies this is deep in the mire of folly. Tis the crown & glory of organic science that it does thro’ final cause, link material to moral. . . You have ignored this link; &, if I do not mistake your meaning, you have done your best in one or two pregnant cases to break it. Were it possible (which thank God it is not) to break it, humanity in my mind, would suffer a damage that might brutalize it–& sink the human race into a lower grade of degradation than any into which it has fallen since its written records tell us of its history.

Despite their differences, the two stayed friends until Sedgwick’s death in 1873.