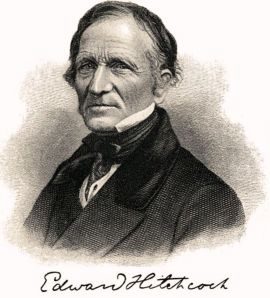 On this date, the geologist and clergyman Edward B. Hitchcock was born. In 1840 he co-founded, with other state geologists, the American Association of Geologists, parent of the American Association for the Advancement of Science, and in 1863 he became a charter member of the National Academy of Sciences. Hitchcock was president of Amherst College from December 1844 to November 1854 and also taught natural theology and geology there from 1845 until his death.

Hitchcock left his mark in paleontology. He published papers on fossilized tracks in the Connecticut Valley, including Eubrontes and Otozoum (these are the names of the footprints, identified by their shape, and not of the genus or genera that made them, which is as yet unknown), that were later associated with dinosaurs, though he believed, with a certain prescience, that they were made by gigantic ancient birds.

However, his chief project was natural theology, which attempted to unify and reconcile science and religion, focusing on geology. His major work in this area was The Religion of Geology and its Connected Sciences (Boston, 1851). In this book, he found somewhat tortured ways to make the Bible agree with the latest geological theories. For example, he knew that the earth was at least hundreds of thousands of years old, vastly older than the 6,000 years posited by Biblical scholars. Hitchcock actually found a way to read the original Hebrew so that a single letter in Genesis—a “v”, meaning “afterwards”—implied the vast time spans during which the earth was formed.