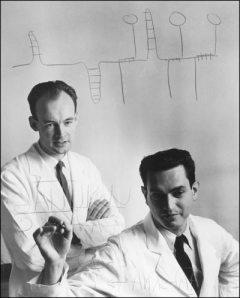 On this date, in a laboratory on the seventh floor of Building 10 on the NIH campus in Bethesda, Maryland at three o’clock in the morning, J. Heinrich Matthaei combined the synthetic RNA made only of uracil (called poly-U) with cell sap derived from E. coli bacteria and added it to each of 20 test tubes. This time the “hot” test tube was phenylalanine. The results were spectacular and simple at the same time: after an hour, the control tubes showed a background level of 70 counts, whereas the hot tube showed 38,000 counts per milligram of protein. The experiment showed that a chain of the repeating bases uracil forced a protein chain made of one repeating amino acid, phenylalanine. The genetic code could be broken! UUU=Phenylalaline was a breakthrough experimental result for Marshall Nirenberg and Heinrich Matthaei.  In August 1961, they published their now-classic report, “The Dependence of Cell-Free Protein Synthesis in E. Coli upon Naturally Occurring or Synthetic Polyribonucleotides,” in the Proceedings of the National Academy of Sciences.

Posted in Genetics and Development, History