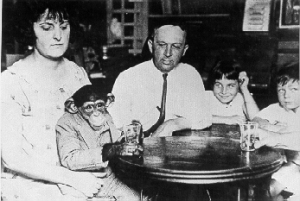 On this date, the prosecution in the Scopes Monkey Trial presented its case against the defendant, calling to the stand Rhea County School Superintendent Walter White, two of John Scopes’ students (Howard Morgan and Harry Shelton), and Fred Robinson, who was a drug store owner and head of the school board. When the time came for cross-examination, Darrow went on the offensive. White conceded that the textbook Scopes was accused of using – Hunter’s Civic Biology– was the official biology textbook of the state of Tennessee. The students admitted that learning Darwin’s theory of evolution from their football coach had in no way damaged their faith or their character. Robinson testified that he himself sold copies of the offending textbook in his drugstore where John Scopes had been arrested.

Towards the end of the day, the defense called its first witness, zoology professor Maynard Metcalf, to explain evolution and to prove that even devout Christians accepted evolution; he was not only an evolutionary biologist from Johns Hopkins University but also a Sunday school teacher at his congregational church. The prosecution argued that Metcalf’s scientific testimony was irrelevant, but Judge Raulston had not yet made up his mind so he excused the jurors while Metcalf was initially questioned.

As court ended that day, Bryan handed Darrow a small wooden monkey, a tiny memento of the trial.