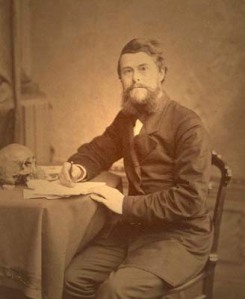 On this date, the American paleontologist, herpetologist, and mammalogist Edward Drinker Cope was born. Cope was a scientist by self-study and personal nature — he held no degrees except honorary ones from Haverford College and, late in life, from the University of Munich. He made many important dinosaur discoveries in western North America but spent 20 years in a protracted battle with his archrival, O.C. Marsh, for professional prestige in what came to be known as the Great Bone Wars. Financially ruined in his later years, Cope had to sell his house and move in with his museum collections. He spent his final days on a cot surrounded by piles of bones.

Cope accepted the fact of evolution but thought that change in developmental (embryonic) timing, not natural selection, was the explanation for how evolution occurs. That is, a new developmental stage would be tacked onto the end of the developmental process, pushing the old end stage further back in development. Such was the view of the American school of self-proclaimed, so-called neo-Lamarckians, who invoked an internal drive for “accelerated growth” as well as Lamarckian inheritance of acquired characteristics to account for the seemingly linear pattern of biological evolution that they detected in specimens from the rich fossil beds of the American West. That is, new developmental stages would cause some body parts to become very well developed if those body parts were in heavy use. Thus, the neo-Lamarckians thought that variation and speciation were due to changes in timing of development in different organ systems due to use. In Europe, important contemporaneous neo-Lamarckians included the German biologist Ernst Haeckel and the British botanist George Henslow.