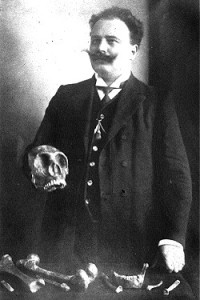 On this date, an almost perfectly preserved Cro-Magnon male skeleton, about 34,000 years old, was discovered by Swiss-German antiquities dealer and historian Otto Hauser. He was a member of a party hunting fossils in the Combe-Capelle rockshelter, France. The following year, Hauser sold this and an earlier discovery of Neandertal skeletal remains from Le Moustier (1908) to the Berlin Völkerkunde-Museum. Most of the skeleton itself is believed to have been destroyed during WW II by allied bombing raids.

The Cro-Magnons are the earliest known European examples of Homo sapiens, living between 35,000 and 10,000 years ago, whose skeletons were first discovered in March, 1868. They were anatomically identical to tall and muscular modern humans, but slightly more robust on average. Finely crafted stone and bone tools, shell and ivory jewelry, and polychrome paintings found on cave walls all testify to the cultural advancement of Cro-Magnon man.