On this date, President George Washington wrote in his Farewell Address to the People of the United States:

…[A]void the necessity of those overgrown Military establishments, which, under any form of Government, are inauspicious to liberty, and which are to be regarded as particularly hostile to Republican Liberty.

Although it is by all accounts the most famous and best-known of Washington’s speeches, it was never actually delivered orally by Washington. It was first published in David C. Claypoole’s American Daily Advertiser (Philadelphia) on 19 September 1796 under the title “The Address of General Washington To The People of The United States on his declining of the Presidency of the United States.”  It was almost immediately reprinted in newspapers across the country and later in a pamphlet form. 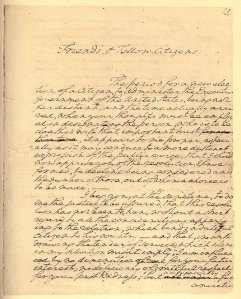 Notwithstanding his role as the nation’s foremost military man, Washington consistently showed little enthusiasm for the idea of a standing army.  He often reflected the perspective taken by Madison, Franklin, and others, who saw ample historical precedent for the deterioration of a republic into an authoritarian regime when a leader used threats from abroad as a means of augmenting his authority as a military leader and undermining the authority of the other departments.

And as the above quote indicates, long before President Dwight Eisenhower warned the nation about the dangers of “an immense military establishment and a large arms industry” in the Farewell Address he delivered over 50 years ago, Americans were familiar with the threat of “overgrown military establishments” to liberty.

In the early days of the United States, Americans, having just thrown off the yoke of the British empire, were understandably suspicious of standing armies in peacetime. The national army was kept intentionally small in peacetime, expanded in times of war, and reduced to prewar levels at the end of hostilities.

That was the pattern followed through the end of World War I, a time when many were beginning to question why America had entered the war in the first place, thereby entangling the country in the political, economic, and ethnic rivalries of Europe.  However, although America began to demobilize after World War II, there was no “return to normalcy” as President Harding had called for at the end of the previous war. The beginning of the Cold War with the Soviet Union, the fall of China to the communists, and the Korean War put America on a wartime footing that has become more or less permanent, whether we are in undeclared “shooting wars,” as in Korea, Vietnam, or our current wars in the Middle East, or in times of relative peace, most notably during the decade between the breakup of the Soviet Union and the terrorist attacks of September 11.

Today America resembles a worldwide garrison state, with our 1.5 million military personnel scattered over more than 4,500 military sites in our own country and more than 700 bases in 130 foreign lands. (The number of bases may actually be higher, since the Pentagon does not count bases with a “Plant Replacement Value” of less than $10 million.) Add to that all the billions awarded in defense contracts each year and the large number of people employed in defense-related industries, and Washington’s and Eisenhower’s words, which may have seemed dramatic at the time, seem more like an understatement today.

Between elections, members of the weapons industry sit in high places, bringing to the “councils of government” that “unwarranted influence” of which Eisenhower warned. Former Lockheed Martin Chief Operating Officer Peter Teets was appointed Under Secretary of the Air Force and Director of the National Reconnaissance Office during the Bush the Second’s administration. The Secretary of the Air Force was James Roche, a former vice president at Northrop Grumman. Secretary of the Navy Gordon England was vice president at General Dynamics. Deputy Secretary of State Richard Armitage had been a member of Raytheon’s board of directors and a consultant to Boeing. Senior Advisor to the President Karl Rove, who encouraged Republican candidates to support the Iraq War nine months before it started, owned between $100,000 and $250,000 worth of Boeing stock, according to his disclosure forms. By happy coincidence, Boeing has sold at least 40 commercial planes, worth nearly $4 billion, to Iraq since Saddam Hussein’s regime was toppled.

There is no time in the nation’s history in which Washington’s and Eisenhower’s warning has sounded more clearly and powerfully than the present.

Like Loading...
This entry was posted in History and tagged Dwight Eisenhower, History, Military Spending. Bookmark the permalink.