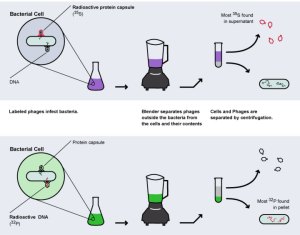 On this date, geneticists Alfred Hershey and Martha Chase published the findings of their so-called blender experiments, which concluded that DNA (DeoxyriboNucleic Acid) is where life’s hereditary data is found.

Prior to these experiments, so named because they were conducted using a regular kitchen blender, it was generally thought that proteins — not DNA — were the genetic stuff of life.

Their experiments used the T2 bacteriophage, which, like other viruses, is just a crystal of DNA and protein. It can reproduce when inside a bacterium such as Escherichia coli, or E. coli for short. When the new T2 viruses are ready to leave the host E. coli cell (and go infect others), they burst the E. coli cell open, killing it (hence the name “bacteriophage”).

Hershey and Chase were seeking an answer to the question, “Is it the viral DNA or viral protein coat (capsid) that is the viral genetic code material which gets injected into the E. coli?” Using the kitchen blender, Hershey and Chase separated the protein coating from the DNA of T2 bacteriophage. Injecting the DNA into the bacterial cell, they found that it was the nucleic acid itself, and not the protein, that caused the transmission of hereditary information.

The Hershey–Chase experiment, its predecessors, such as the Avery-MacLeod-McCarty experiment, and successors served to unequivocally establish that hereditary information was carried by DNA.

Alfred Hershey was awarded the Nobel Prize in Physiology or Medicine in 1969. He shared the prize with two American scientists, Max Delbrück and Salvador Luria, for “discoveries concerning the replication mechanism and the genetic structure of viruses” but Chase, who served as Hershey’s lab assistant during his experiments and whose name appears on the paper, was snubbed.