HMS Beagle spent this day in the Galapagos Archipelago surveying the waters around Charles Island, which was populated by a small colony of about 250 political prisoners from the Republic of Equator (established in 1829). Darwin went on shore with Covington to collect plants and birds and climbed the highest hill — about 1,800 feet above sea level. He also examined a few curious lava chimneys. During his stay on the island, Darwin was informed by Mr. Nicholas Lawson, an Englishman in charge of the prison colony, that one can tell which island a tortoise came from by looking at its shell. 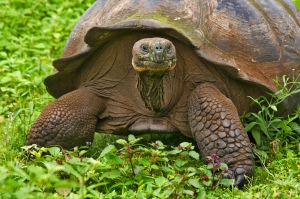 Later, when Darwin was completing his ornithological notes some time between mid-June and August 1836, he wrote:

When I recollect the fact, that from the form of the body, shape of scales & general size, the Spaniards can at once pronounce from which Isd. any tortoise may have been brought: — when I see these Islands in sight of each other and possessed of but a scanty stock of animals, tenanted by these birds but slightly differing in structure & filling the same place in Nature, I must suspect they are only varieties. The only fact of a similar kind of which I am aware is the constant asserted difference between the wolf-like Fox of East & West Falkland lsds. — If there is the slightest foundation for these remarks, the Zoology of Archipelagoes will be well worth examining; for such facts would undermine the stability of species.

The first stirrings of doubt about the immutability of species had evidently struck Darwin by now.