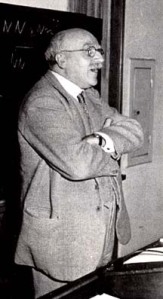 On this date, British geneticist and biometrician John Burdon Sanderson Haldane was born. He was one of the three major figures to develop the mathematical theory of population genetics. (He is usually regarded as the third of these in importance, after R. A. Fisher and Sewall Wright.) Population genetics became one of the key elements of what would be called the Modern Synthesis. It revealed how mutations arise and, if they are favored by natural selection, can spread through a population, causing evolutionary change without the help of imaginary Lamarckian forces. Haldane also worked in biochemistry, and on the effects of diving on human physiology. He was the first to suggest that membranes played a role in the origin of life in his prescient note in The Rationalist Annual (1926). He wrote that “The cell consists of numerous half-living chemical molecules suspended in water and enclosed in an oily film. When the whole sea was a vast chemical laboratory the conditions for the formation of such films must have been relatively favorable . . .” In 1954, Haldane, speaking at the Symposium on the Origin of Life, suggested that an alternative biochemistry could be conceived in which water was replaced as a solvent by liquid ammonia.

J.B.S. Haldane began studying science at the age of eight, as assistant to his father (the noted physiologist John Scott Haldane). A Marxist from the 1930s, Haldane was well known for his outspoken Marxist views. He resigned from the Communist Party around 1950 on the issue of Lysenko’s claims to have manipulated the genetic structure of plants and “Stalin’s interference with science.” He became known to a large public as a witty popularizer of science with such works as Daedalus (1924), Possible Worlds (1927), and The Causes of Evolution (1932).

Purportedly, it is Haldane who made the famous comment that all that biology tells us about the nature of God is that he has “an inordinate fondness for beetles” (reported in G. E. Hutchison, 1959, Amer. Natur. 93:145-159).