On this date, the the first in a series of six articles announcing the supposed discovery of life on the moon appeared in the New York Sun newspaper (subsequent installments appeared on August 26, 27, 28, 29, and 31). It bore the headline:

GREAT ASTRONOMICAL DISCOVERIES
LATELY MADE
BY SIR JOHN HERSCHEL, L.L.D. F.R.S. &c.
At the Cape of Good Hope
[From Supplement to the Edinburgh Journal of Science] 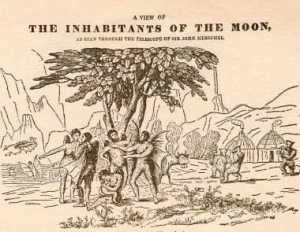 "A View of the Inhabitants of the Moon" Illustration from an 1836 English pamphlet, publisher unknown. Note the biped beavers on the right.

The article began by triumphantly listing a series of stunning astronomical breakthroughs that the famous British astronomer, Sir John Herschel, had apparently made “by means of a telescope of vast dimensions and an entirely new principle.” Herschel, the article declared, had established a “new theory of cometary phenomena”; he had discovered planets in other solar systems; and he had “solved or corrected nearly every leading problem of mathematical astronomy.” Then, almost as if it were an afterthought, the article revealed Herschel’s final, stunning achievement: he had discovered life on the moon!

The article continued on and offered an elaborate account of the fantastic sights viewed by Herschel during his telescopic observation of the moon. It described a lunar topography that included vast forests, inland seas, and lilac-hued quartz pyramids. Readers learned that herds of bison wandered across the plains of the moon; that blue unicorns perched on its hilltops; and that spherical, amphibious creatures rolled across its beaches. The highpoint of the narrative came when it revealed that Herschel had found evidence of intelligent life on the moon: he had discovered both a primitive tribe of hut-dwelling, fire-wielding biped beavers, and a race of winged humans living in pastoral harmony around a mysterious, golden-roofed temple. Herschel dubbed these latter creatures the Vespertilio-homo, or “man-bat”. 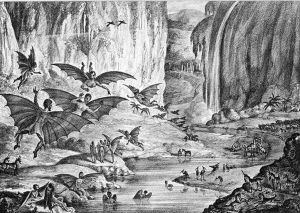 The article, of course, was an elaborate hoax. Herschel had in fact traveled to Capetown, South Africa, in January 1834 to set up an observatory with a powerful new telescope. But Herschel had not really observed life on the moon, nor had he accomplished any of the other astronomical breakthroughs credited to him in the article. In fact, Herschel was not even aware until much later that such discoveries had been attributed to him. Furthermore, the Edinburgh Journal of Science had stopped publication years earlier, and Grant was a fictional character. However, the New York Sun managed to sell thousands of copies of the article before the public realized that it had been hoaxed.

The articles were most likely written by Richard Adams Locke, a Sun reporter educated at Cambridge University. Intended as satire, they were designed to poke fun at earlier, serious speculations about extraterrestrial life, particularly those of Reverend Thomas Dick, a popular science writer who claimed in his bestselling books that the moon alone had 4.2 billion inhabitants.

However, Locke never publicly admitted to being the author of the hoax, and rumors have persisted that others were also involved in the production of the story. Two men in particular have been mentioned in connection with the hoax: Jean-Nicolas Nicollet, a French astronomer who was travelling through America at the time (though he was in Mississippi, not New York, when the moon hoax appeared), and Lewis Gaylord Clark, editor of the Knickerbocker Magazine. However, there is no real evidence to suggest that anyone but Locke was the author of the hoax. 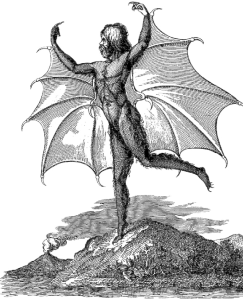 Readers were completely taken in by the story, however, and failed to recognize it as satire. The craze over Herschel’s supposed discoveries even fooled a committee of Yale University scientists, who traveled to New York in search of the Edinburgh Journal articles. After Sun employees sent them back and forth between the printing and editorial offices, hoping to discourage them, the scientists returned to New Haven without realizing they had been tricked.

Despite the intense public speculation about the moon story, the Sun never publicly conceded that it was a hoax. On September 16, 1835 the Sun did publish a column in which it discussed the possibility that the story was a hoax, but it never confessed to anything. Quite the contrary. It wrote that, “Certain correspondents have been urging us to come out and confess the whole to be a hoax; but this we can by no means do, until we have the testimony of the English or Scotch papers to corroborate such a declaration.” This is the closest the Sun ever came to an admission of guilt.

People were generally amused by the whole thing, and sales of the paper didn’t suffer.

On this date, NASA Administrator Daniel Goldin announced the discovery of evidence of a primitive bacterial life form on Mars. The evidence came from a tiny putative fossil found on a meteorite in Antarctica thought to have come from Mars billions of years ago. The meteorite, called ALH84001, was found in 1984 in Allan Hills ice field, Antarctica, by an annual expedition of the National Science Foundation’s Antarctic Meteorite Program. It was preserved for study in JSC’s Meteorite Processing Laboratory and its possible Martian origin was not recognized until 1993.

The indication of life hinges on three important pieces of evidence, all discovered within mineralized fractures in the meteorite in close proximity to each other:

Based on age dating of the meteorite, the following scenario has been proposed:

On this date, the American chemist and biologist Stanley Lloyd Miller was born. In 1953, he (under his University of Chicago mentor, Nobelist Harold C. Urey) performed a famous experiment (the so-called Miller-Urey experiment) to determine the possible origin of life from inorganic chemicals on the primeval, just-formed Earth. They passed electrical discharges (simulating thunderstorms) through mixtures of reducing gases, such as hydrogen, ammonia, methane and water, believed to have formed the earliest atmosphere. Analysis days later showed the resulting chemicals included five amino acids: aspartic acid, glycine, alpha-amino-butyric acid, and two versions of alanine. Aspartic acid, glycine, and alanine are common building blocks of natural proteins. Other compounds included urea, aldehydes, and carboxylic acids. This experiment showed that the basic molecules of life could be synthesized from simple molecules, suggesting that Darwin’s “warm little pond” was a feasible scenario.

The apparatus used for Miller's original experiment. Boiled water (1) creates airflow, driving steam and gases through a spark (2). A cooling condenser (3) turns some steam back into liquid water, which drips down into the trap (4), where chemical products also settle.

Interestingly, the 1953 Miller-Urey experiment had two sibling studies, neither of which was published. Vials containing the products from those experiments were recently recovered and reanalyzed using modern technology. The results were reported in the 17 October 2008 issue of the journal Science.

Miller relied on a blotting technique to identify the organic molecules he had created — primitive laboratory conditions by today’s standards. He would not have been able to identify anything present at very low levels. 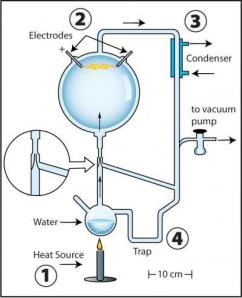 The apparatus used for Miller's "second," initially unpublished experiment. Boiled water (1) creates airflow, driving steam and gases through a spark (2). A tapering of the glass apparatus (inlay) creates a spigot effect, increasing air flow. A cooling condenser (3) turns some steam back into liquid water, which drips down into the trap (4), where chemical products also settle.

However, “The apparatus Stanley Miller paid the least attention to gave the most exciting results,” said Johnson, lead author of the Science report. The difference between the published and two unpublished experiments is small — the unpublished experiments used a tapering glass “aspirator” that simply increased air flow through a hollow, air-tight glass device. Increased air flow created a more dynamic reaction vessel, or “vapor-rich volcanic” conditions, according to the present report’s authors. The 11 vials scientists recovered from Miller’s “second,” initially unpublished experiment produced 22 amino acids and the same five amines at yields comparable to the original experiment.

“We believed there was more to be learned from Miller’s original experiment,” Bada said. “We found that in comparison to his design everyone is familiar with from textbooks, the volcanic apparatus produces a wider variety of compounds.” Johnson added, “Many of these other amino acids have hydroxyl groups attached to them, meaning they’d be more reactive and more likely to create totally new molecules, given enough time.” The report’s authors bring up-to-date what is a plausible scenario for the origin of the earliest biochemical molecules on Earth:

Geoscientists today doubt that the primitive atmosphere had the highly reducing composition Miller used. However, the volcanic apparatus experiment suggests that, even if the overall atmosphere was not reducing, localized prebiotic synthesis could have been effective. Reduced gases and lightning associated with volcanic eruptions in hot spots or island arc–type systems could have been prevalent on the early Earth before extensive continents formed. In these volcanic plumes, HCN, aldehydes, and ketones may have been produced, which, after washing out of the atmosphere, could have become involved in the synthesis of organic molecules. Amino acids formed in volcanic island systems could have accumulated in tidal areas, where they could be polymerized by carbonyl sulfide, a simple volcanic gas that has been shown to form peptides under mild conditions.

Miller’s third, also unpublished, experiment used an apparatus that had an aspirator but used a “silent” discharge. This third device appears to have produced a lower diversity of organic molecules.

“This research is both a link to the experimental foundations of astrobiology as well as an exciting result leading toward greater understanding of how life might have arisen on Earth,” said Carl Pilcher, director of the NASA Astrobiology Institute, headquartered at NASA Ames Research Center in Mountain View, Calif.

WARNING: The creationist Jonathan Wells of the Discovery Institute has made false and misleading claims about the Miller-Urey experiment and other abiogenesis research in his book Icons of Evolution: Science or Myth? Why Much of What We Teach About Evolution Is Wrong.